No, I haven’t forgotten. And yes, I offered the opportunity of writing this post to my husband, who laughed out loud.

“I know better than that!” he said.

Two days later I asked him again. He looked startled and said “Goodness, when?” Which being interpreted is, “I would be so delighted to do this thing for you, my dear, truly I would. But as you know, I am much occupied in the winning of bread and the performing of other manly offices. You go right ahead: I believe in you.”

At least, I’m sure it went something like that… 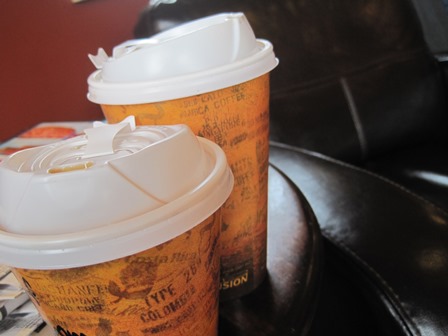 When talking with women

If the rule for women is 49%, the rule for men must be 210%. Which means, you say what you’re thinking—like open your mouth and let it all out—and then look deeply into her eyes and lower your voice and say it all again in slightly different words, gently. Adding a little extra that you thought of during the second go.

I don’t mean to be rude, and I’m making a point of saying that you men are good at many things—if the world depended on me to pound nails and build websites and grow beards and stuff we’d all be dead by now—but really? the subtle cue thing is a little lost on you.

Kronk described it well: “the Cold Shoulder, the Frenzied Eyebrow, the Grimace of Doom, the Sneer of Despair, the Crippling Wince of Guilt, the Scowl of Impending Wrath, and worst of all, the Nostril Flare of Total Rejection.”

Little things like that. It’s important to stay tuned, men, or honestly? You’ll never know what hit you. Even though she gave you fair warning.

I am probably betraying my half of the species by admitting it, but women love questions. Not “Where’d you get this cut of meat and how much did you pay for it and did you remember to fill the car with gas?” but “How was your day? Are things going better with that friendship you talked about last week? What do you think about…?”

When the words “Talk to me, hon. What are you feeling?” come out of your mouth, you achieve instant hero status. Her whole world lights up.

And in the end, if this is all too tall an order and too hot a minefield, do this little thing:

Look into her eyes, lay down the paper or the laptop or the smartphone at least for a time, and make sympathetic noises. Grunts are good. Chuckles. Sighs. {Just no farts or hiccups, por favor.}

This will please her. She will go away thinking what a great conversationalist you are.

So then… after my husband said No, he produced this brilliance:

* No, this is not the same viewpoint as the one his wife expressed above. I’m leaving it in, with a disclaimer—unlike his last point, which I struck from the record entirely: something about “if you have something difficult to say and you don’t know how to say it—don’t.” Utter poppycock. Well, well. You see we are still under construction.

In short, good luck to you boys: you will need it. May your race increase.

I am not sure if any of this is true. Persons of either gender should feel free to amend and correct. I should, however, like to state for the sake of anyone who is in doubt that I am madly in love with my husband.

And as always… But Of Course There Are Obvious Exceptions. You may be one: in which case you may x this window and say “That woman does not have a clue what she’s talking about.” You would be quite right. Although I would prefer that you’d say it to my face. Twice over. Gently.

15 Replies to “When talking with women”