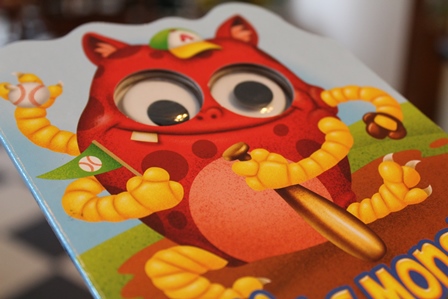 So last night I had a dream in which Ryan was talking to a group of men about the challenges of communicating with women. He was acting out the roles, the way he can be toodling along in a conversation and then suddenly blind-sided by a sharp question from his wife. POW! Ryan staggered around acting out how this feels and all the men started choking up, getting tears in their eyes.

I mean whaddya say? It’s one of those questions where every answer gets your head cut off.

Someone in the audience tried to read aloud a passage from a helpful book (I think it was this board book that belongs to my son, brightly colored and with googly eyes on the cover)

but he couldn’t talk past the lump in his throat and passed it to a friend, who hemmed and hawed trying to get himself under control so he could share its profound wisdom with the class.

Sadly, the dream ended before anyone read the enlightening words that would have made sense of it all and offered a way forward.

I guess you will have to write them yourself… What say?

6 Replies to “The key to communication found MIA”