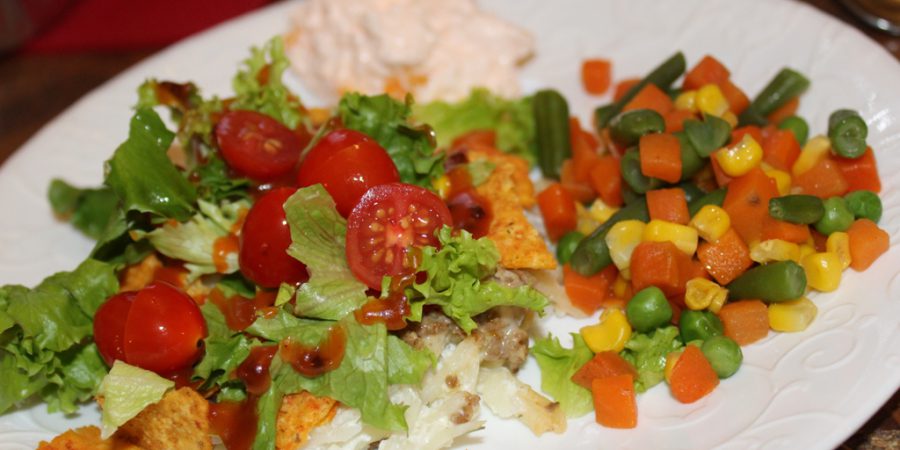 Our family was temporarily flattened by the stomach bug in the middle of last week. On the whole, I can think of better ways to spend the middle of your week, but this is the one that chose us. Five of us came down with it within 24 hours of each other, in varying degrees of intensity which I shall not describe here. And within hours, we were on the mend

But the next day I felt like a truck hit me and when I stood up, I thought I was going to pass out. I spent the entire day on the couch resting while the children played and climbed on me and asked for stuff which I got them

And that night, my friend Shaunda brought me dinner.

It was roast beef and fixings, with homemade bread and a huge tray of fresh fruit – lush strawberries, pineapple, clementines, bananas.

This is at least the seventh dinner that’s been given to me since my foster kiddos arrived seven weeks ago; and another is promised for next week. Plus there’ve been special desserts and homemade granola and snack mixes and a huge box of diapers and babysitting and you know, little stuff like that; ladies bring this and say can you use it? I don’t know how to say how blessed I am.

The fruit tray caught my eye. I mean the fruit, and then the tray itself, after we ate the fruit and cleared what was left into the fridge for later. I gave that tray to Shaunda the week before, with eight pumpkin bars on it, when her Grandma passed away. I felt sort of silly making dessert for a death in the family, but I had this tray and I thought it wanted to be given.

It came back more loaded than I sent it. It’s such a nice tray, disposable so you don’t have to return it, but sturdy, with a clear plastic cover. I got it from my friend Carla

Who sent it to me filled with frosted spice bars when our kiddos came.

I’m not returning the empty tray with the roast beef dishes; I snitched it. I don’t know who will get it next, but I love belonging to this sisterhood that knows how to give and to receive, and to recover from sorrow one week and tie on an apron the next and make more food to pass on. I can never give enough to repay what I’m given.

The whole is more than the sum of its parts, as Aristotle or one of those guys said.

Which being interpreted is, There’s an awful lot of food being cooked around here that’s not being cooked by me.

Tell me one way somebody blessed you this past week?