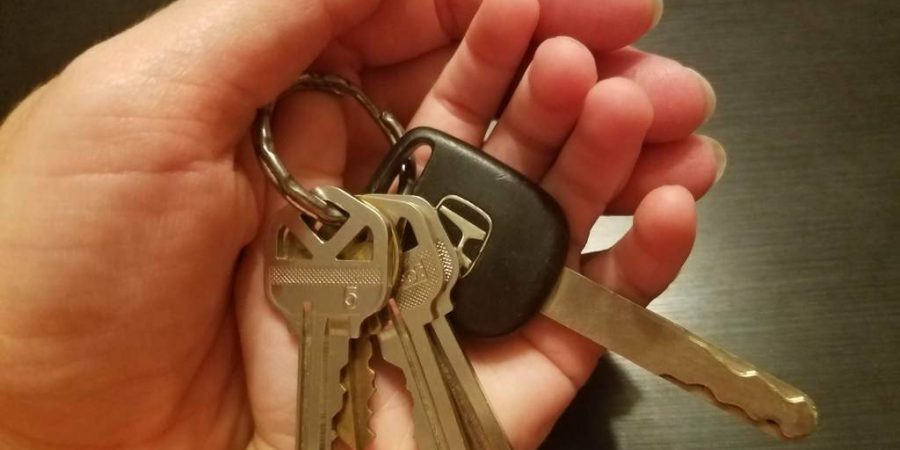 August that year seemed especially steamy, with temperatures soaring through the 90’s. On the hottest day of all, I took my small son Aarick to run errands with me in town. He was my first baby – now thirteen months old, able to walk around and to experiment with his first words. His hair was brown, his eyes were striking, his grin was quick. I thought he was perfect.

But whew! That heat! We really should have picked a cooler day.

We stopped at the post office to buy stamps, and when we came back out to our car (the white Ford Taurus my husband Ryan had brought to our marriage), we found it wouldn’t start. Not again! We’d had a recurring issue with this several months ago and had found we had to wiggle a particular wire under the car body to get things going again. Ryan had taught me how, but it hadn’t happened for so long that I’d forgotten where to reach.

We headed back into the post office to find a phone. (Yes. I really survived without a cell phone in those days, and so did many of my friends. After all, this was way back in the Dark Ages of 2006.) The workers directed me to the nearest pay phone, a block and a half away by Rite Aid.

I carried my son through two traffic lights and called Ryan at work. He told me how to fix the wires (Call me again if you have trouble, hon!), and back to the car we walked, overwarm now and ready to be on our way.

I didn’t want to strap Aarick in his car seat, in case my wire wiggling skills were inadequate and we had to walk back to the pay phone. The concrete sidewalk was far too hot for his little feet. So I unlocked the passenger’s side door and placed him on the front seat. I gave him my keys to play with – just plain keys, no auto buttons or anything dangerous – they were his favorite toy in the world. Carefully, I pushed the Unlock button to open all the doors, and then, to save him from falling out, I shut the door.

And oh, God help me. I must have pushed the wrong side of the Unlock button, because when I stood up from wiggling those all-important wires, hoping I’d done whatever it was I needed to do, and walked to my door to try the ignition, I found my door was locked. So was the door behind it, and the ones on the other side… and there was my child, playing contentedly with my keys, locked inside a vehicle on the hottest day of summer, and there was I, closer to panicking than I’ve ever been before or since.

I didn’t know what to do. I had friends in town, but few, and they didn’t have keys for me. I didn’t have a phone, other than that wretched pay phone. I was terrified of alerting anyone official. I’d never been fearful of having my parenting scrutinized, but the Car Seat Incident, in which we were reported to Children and Youth Services for a minor infraction, was mere days in our past, and it had rattled me horribly.

(If I’ve never told you that story, you can read it here on The Dock, along with my thoughts on reporting child abuse.)

Desperately, I ran the block and a half back to the pay phone, called Ryan back, told him what I’d done. I could hear him galvanizing into action. I’ll be right there! he said. But I knew he was fifteen minutes away.

I hurried back to Aarick. He could not have been in the vehicle more than five minutes, but already his face was bright red and beads of sweat stood on his nose. The ends of his hair were damp. Oh, God, it is hot. He’ll never be okay.

By now he had dropped the keys on the floor, and he stood up against the passengers-side window. He patted his hands against the window and smiled at me.

Then he reached for the buttons on the door. He touched the window control… Was it possible he could unlock it himself? I tapped my fingers on the window above the lock and unlock button, trying to interest him in reaching farther.

He fiddled. He touched the right button, but pushed only the side nearest to him, the Lock side, and I heard the doors click.

I hardly dared to hope, but I knew how my boy loved gadgets and buttons. I kept tapping above it, keeping him interested.

A man walked by on the sidewalk and turned to look back at me. Is he okay? he asked. And another voice over my shoulder said, Yeah, I was just going to ask you…

Aarick stretched, his baby fingers reaching toward the Unlock.

My husband is on his way, and…

He pushed the button. All the doors unlocked, the most beautiful sound I’d ever heard. Quickly I opened the door and snatched him out, while the heat of the interior hit my face like the draft from an oven. I felt shaky with relief and gratitude. He’s okay now!! I said, and held tight to my son while I told what had happened.

He did a pretty good job, didn’t he? a stranger said. And he was right. I do not know what honors will be in Aarick’s future, but I do not think I can ever be prouder of him than I was at that moment.

I carried my son into the air-conditioned post office to wait. The cool was delicious, and my husband was on his way.