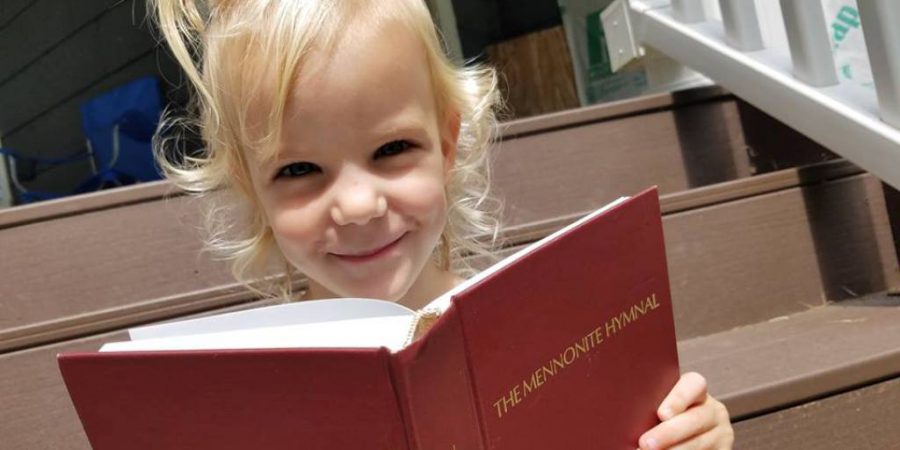 My first church was a tiny one in northern Minnesota. When I say northern, I mean northern; you could walk through the woods behind our house to the Rainy River and look across it to Canada, if the mosquitoes didn’t eat you on the way.

In a white country church house with six pews on the right and six pews on the left, an attendance board on the front wall and a plaque that read THE TRUTH SHALL MAKE YOU FREE, and paneled walls that revealed to my childish mind the fanciful figures of owls and cats, I formed my first ideas of God and his people. Folks tended to sit in the same places in those pews: my grandparents on the front left, Amos and Rebecca across from them on a cushion for their aging bums, dear old Edna Schell behind them, and our family next.

I attended school in the basement of that church house. I jumped rope with my friends on the concrete pad by the door. I knew where the huge ant hills were, in the grass beyond the building, and where the forest of tiny evergreen trees grew, and how to use the outhouse when the one-hole unisex bathroom indoors was occupied.

Children went to church barefoot on Wednesday nights in summertime. When the leaves fell, we studied our school books downstairs, and played softball in the backyard. In winter, we Christmas caroled for hours, all bundled up, and then met back at the church house for chili soup and treats. In the spring, we had an Easter sunrise service and a hot brunch.

Our larger sphere included two other small congregations we fellowshipped with. Our policies were not identical, but our faith was stronger together. We were the only three Anabaptist churches in the region. Non-Mennonite friends and neighbors formed a significant chunk of our social interaction.

I know things were not all perfect there; I was much older before I heard the backstories. But I have never met anyone who didn’t speak of those little churches with fondness and joy.

To say I knew all the people in my church is like saying I knew all my siblings. I had a personal connection to each one. I knew to watch out for my friend Jo’s dad, because he liked pulling braids as if they were horse reins. I knew baby Morgan, who had no hair, and her beautiful mother Jeanette, who pulled a long lacy prayer veiling out of her purse when church began, because she came from another denomination and draped her head during services. My friend Jane was my role model, a few years older, capable, artistic. Rebecca, who at sixty-something was ancient and earnest, loved my age group and frequently taught my Sunday school classes; Jane C was a great teacher too and always tucked an object lesson into her bag. We bought raw milk in gallon-sized glass jugs from our friends Les and Joan. My uncle John walked around the church house with scissors, snipping runners off the unraveling orange carpet. Florence Reimer was the school teacher, tall and regal, and June Peggar was just June, always there: my father rushed from our property to help when her house lit on fire. Grandpa Eli pounded his pulpit. Asher and Kristi were adorable babies. I always wanted to talk the way their mother Rachel did because the corners of her mouth looked so pretty; I practiced in front of the mirror.

There was always someone to play with. Not many, but someone. My cousin Justin was my best friend, and Jo and Sonny were always nearby to fight or play games. Later, Rachel came, a redhead who became my first close girlfriend. I shared a baptismal class with Matt and Louise, cleansing water trickling down my head when I was ten years old. From then on, I was a voting member of the church, taking communion, kissing the other ladies as a sign of peace.

I suppose that in most congregations, the young are the favorites of the old, but in my church, the opposite was also true: the old were the favorites of the young. We’d never heard of generation gaps. Everyone loved everyone. I remember one of the oldest men in our church racing the young boys across the yard just for fun, his bow legs twinkling. The oldest woman brought the best food to church potlucks, and always the same food: pot roast to melt in your mouth, and blueberry delight. Old Mr. Herman, in the next church over, told spellbinding stories from his early life. He said he’d be very surprised if the Lord hadn’t returned before he died; we watched him to see. Taps, named for her previous life as a barmaid before she found Christ, had fluffy permed hair and wrinkles on her face, and one day she gave me a drink of hot water by mistake instead of cold. Oh, HONEY!! she said, when she saw my face. The old of the community were storehouses of faithfulness, involvement, wisdom. They talked to us and touched our heads and called us by our nicknames. Children of the community, including myself, were light of the eyes and hope of the heart. We knew it, and the knowing gave us life.

When I was eleven years old, we moved a thousand miles away, to a church community that might as well have been on another planet. There I stayed until my marriage.

I suppose that at some level, all the rest of my life of faith has been an aching to go back.

27 Replies to “My church experience”