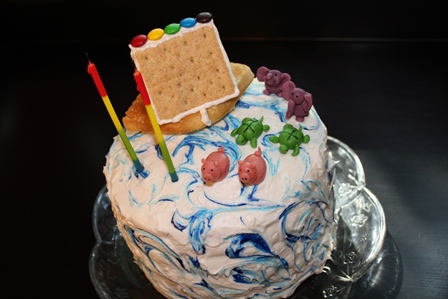 When I was in my upper teens, my dad and I attended a Father-Daughter Banquet together. One of the after dinner activities was a paper for the dads to fill out, starting with In ten to twenty years, my daughter will be…

Most of the predictions were a variation of I hope she will be serving the Lord wherever her lot falls. But my dad had us all laughing, carried away by his prophetic sagacity.

Yesterday I dug out his prediction paper and found he wrote:

In 10-20 years, my daughter will be married—no question—after having graduated from nursing school with honors. She will be driving a 2010 yellow Beetle—a five speed with twin car seats in the back… with twins in, of course. Her two-year-old twins will be talking non-stop and giggling as they try to land pieces of pretzels on their mom’s head. My daughter will patiently explain the proper use of pretzels while fervently repenting of all her own childhood sins. –John Coblentz

He got a few details mixed up, of course. It’s two of my brothers who did nursing school with honors, and my sister is the one who got the Beetle. But fifteen years after the banquet, I have done a significant amount of repenting, and the gigglers just turned two.

And yes, they throw pretzels.

So it would have been nice if he had predicted them cleaning up toys or getting potty-trained or something useful. {Thanks, Dad.}

We celebrated their big event—uh, birthday, not food fight—with a Noah’s Ark cake I learned from the baking queen in my life, my sister-in-law Chastin.

Mix up two white cake mixes and bake them in seven layers, one for each color of the rainbow. (I don’t have seven round cake pans, so using disposable pans meant I could bake a bunch all at once. Don’t tell anyone I washed and saved them for freezer casseroles when this baby comes.) 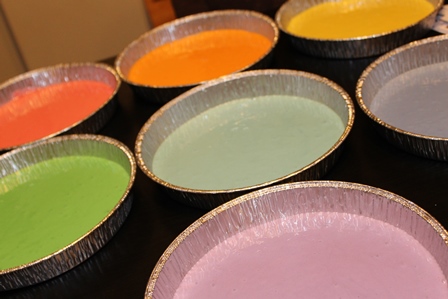 Stack the layers in order with a thin layer of buttercream frosting. (It doesn’t look “thin” on the picture but it’s compensating for the curvature of the earth, or something.)

You will need to drink lots of coffee during this stage, because you will know the whole stack is going to fall over. Miraculously, it won’t. The coffee will help with your other issues though, so it’s not in vain.

Then top with a Noah’s Ark set of your choice. You can use a plastic one from your toy stash, or make your own. My ark, fashioned of cake bits and graham crackers, is what I would call a good try—almost, though not entirely, unlike a boat.

But bubble gum animals are super fun to make. Start with Bubblicious gum, those thick cubes, and shape like Play-doh with as many details as you wish. Dipping a toothpick in food coloring makes cute eyes and accent marks. 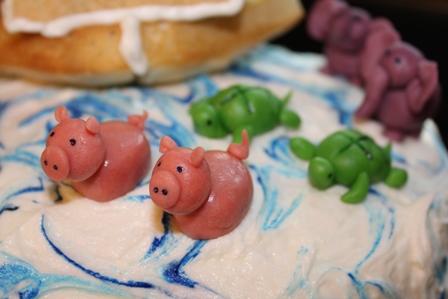 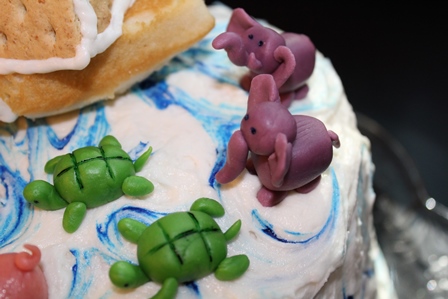 The nice thing about this cake is that it gets prettier when you cut it. 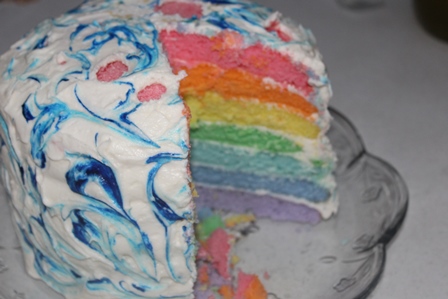 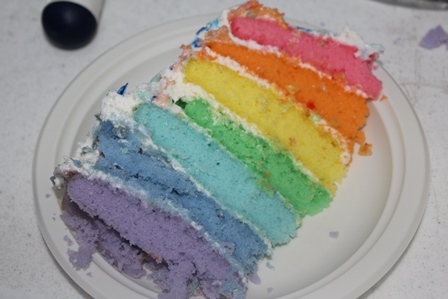 Happy birthday, babies! May you live long and prosper.
(But that is not the proper use of pretzels.)