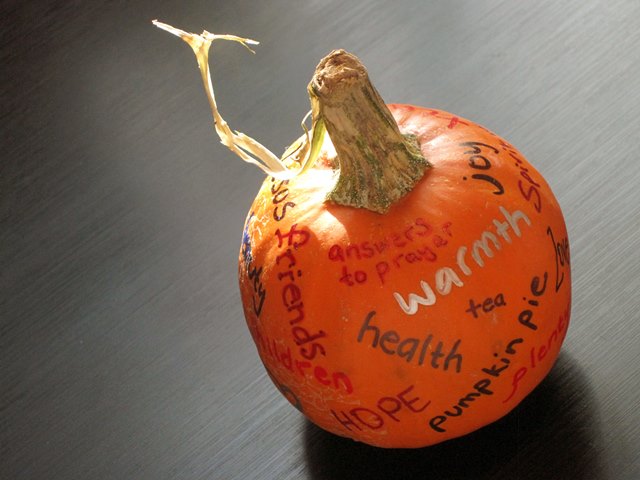 Once upon a time, the Pilgrims and Native Americans got together for a big fiesta. They ate venison and corn, pumpkins and nuts and delicacies until they were full, giving thanks for a great year together. And that’s how it all started.

But this week my daughter was reading a children’s book about what happened before the beginning of that story. She read about the long winter, the freezing temperatures, the illness, the death. She read that the Pilgrims would slip out into the deep night to bury their dead. They didn’t want the Americans to know how few of them were left.

In the spring, when Samoset and Squanto appeared and scared them half to death (half of them had already died, so I’m telling it to you straight), the Pilgrim’s fears turned out to be unfounded. Instead of bringing terror and destruction, the Native Americans brought vegetable seeds, earth knowledge, sturdy friendship.

Everyone says the moral of Thanksgiving is to be thankful. And it is. The Pilgrims took a deep breath and said, “We made it. Look at this harvest, we’ve stored up what we need for next winter, and we give thanks to God.” But I can’t help thinking about that first dark winter, and the poverty of isolation, the shivering widows standing at the graves of their babies under a chilly moon. God forbid that someone finds out we’re not doing okay. Please, God, don’t let them see us. I’ll just put another shovelful of dirt on top. I’ll wrap my tatters around a weakened body and slip back to my ship in the darkness.

The Native Americans probably had a hard winter too – I’m not saying they were over there in the wigwams lolling in salted deer meat and corn flour. But they had the wisdom the Pilgrims needed, if the Pilgrims hadn’t been trying so hard not to need it.

Another moral of Thanksgiving, the one we don’t talk about, is this: Stop hiding in the darkness.

Take steps of faith through the night to the wigwam next door and sit down by the fire. We can spend so much time planning our militia that we forget the neighbors are not planning an attack. Incredibly, miraculously, friends are out there waiting: not to pounce and scalp, but to teach, to assist, to care. To help.

That is cause for the best Thanksgiving.

If you’re game, tell me three things you’re thankful for today, including one friend you know you can go to when the venison runs out. This has two purposes: it grows your gratitude, and as a bonus, it helps me to know if the bugs are worked out of my comment section before I offer you another gift on Friday. For this, I am grateful to you. We have every reason for joy: Happy Thanksgiving, dear people.

25 Replies to “The moral of Thanksgiving”