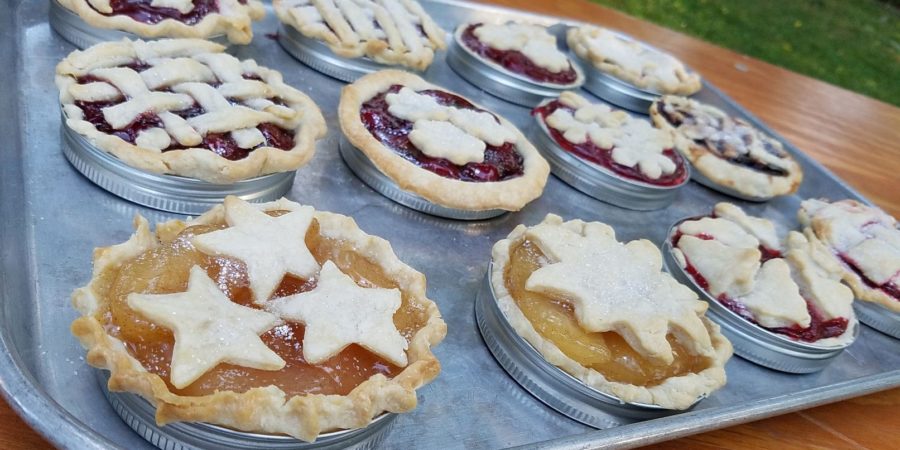 Have you ever baked Mason jar lid pies?

My daughter, my mom, and I tried it with friends last month for the first time, as the finale to a pioneer party for Kelly’s 10th birthday. She loves all things homemade, simple, early American, adventurous, and crafty – so this kind of party was right up her alley.

The scene was easily set with wildflower bouquets, straw hats (from Dollar Tree), and pinafores. (Which on close inspection might turn out to be little girls’ cotton slips from our ample stash. Apparently I keep buying more of the same size in the hopes that they’ll turn out to be longer than before, but they never are. So finally I give up and lengthen them.) For years, Kelly has worn hers outside her dress whenever her imaginary play required a pinny.

We chose embroidery and pie-making for our activities.

I stole the idea of a pioneer birthday party from my friend Ruth Byler in Florida, who chose embroidery and butter-making for her daughter’s activities. (And sewed real aprons! Kudos!) As soon as I saw her lovely ideas, I knew we’d be following suit.

My mom came early to help set up the party and cook the pioneer-food feast. Experimenting with frying Johnny cakes together was our favorite thing. The girls were quite suspicious of them, and they weren’t as big a hit as say, the bacon.

So about these pies though.

You use wide mouth lids as pie pans. Just turn the flats over so the seal is on the bottom, and only the metal is touching the pie crust. After the pies are baked, they pop right out – like mini springform pans without the spring. They are the cutest ever. I am itching to do them again.

Each party guest made her own for dessert. Girls this age are so much fun. Seeing their creativity, delight, and pride was the sweetest. Some of them insisted on wrapping up their pies to take home, eating only a bite or two (if any), because “it’s the first pie I ever made” or “I want my dad to see it.”

We had pre-made and rolled the crust, and we made sure to grease the pans. Then the girls:

The pies came out golden and delectable. I ate a whole one. They’re the perfect serving size, besides having extra crust, which is always the best part. They didn’t even drip over, as we feared. So darling!

While the pies baked, my mom taught the girls embroidery. We found inexpensive embroidery hoops online, so the girls could take their project home – with hoop, needle, floss, and a fabric square marked ahead of time with a Mark-B-Gone pen and a stencil. Ten and eleven year old girls are at the perfect stage for this kind of needlework. A few have practiced before. They’re coordinated enough to do a great job, but still childish enough to labor over threading a needle with several strands of floss – and to squeal in delight over their first French knot.

But for sheer novelty, those pies took (as you might say) the cake. We’re trying it with the two- to four-year-old nieces next!